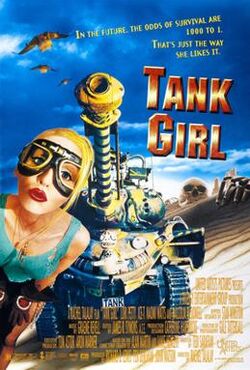 Tank Girl is a 1995 American science fiction action film loosely based on the Tank Girl comic book created by Alan Martin and Jamie Hewlett. It was released in the United States on March 31, 1995. It was produced by Trilogy Entertainment Group and distributed by United Artists.

In the year 2022 the Earth was struck by a comet, causing an 11 year drought. By 2033, a majority of the scarce water supply is being held in reserve by Water & Power, which uses the water to control the world's population. Rebecca, aka Tank Girl (Lori Petty), is a member of a resistance group that steals whatever water they can find for their community. Their hideout is attacked by W&P, who kill Rebecca's boyfriend and captures her young friend, Sam (Stacy Linn Ramsower). Tank Girl is captured as well, but her defiant nature and independence intrigues Kesslee (Malcolm McDowell) who tortures her instead of executing her, then decides to make her a slave. Tank Girl meets Jet Girl (Naomi Watts), a talented but introverted mechanic who has given up on freedom; she tries to convince Rebecca to make less trouble for them, but Rebecca refuses and is only tortured more.

Meanwhile, W&P is having difficulty with a group called the Rippers, inhuman renegades that slaughters Kesslee's men and escape undetected. Kesslee uses Tank Girl as bait to draw out the Rippers, but they turn the tables, gravely injuring Kesslee and letting Rebecca escape. Jet Girl joins her, and they learn from the eccentric Sub Girl (Ann Cusack) that Sam is working at Liquid Silver, an adult entertainment club. They infiltrate the club and rescue Sam from a lecherous pedophile (Iggy Pop) before humiliating the owner "The Madame" by making her sing Cole Porter's "Let's Do It." W&P breaks up the song and Sam is again captured. With nowhere to go, Tank Girl and Jet wander the desert, eventually finding the Rippers' hideout (a buried bowling alley) where they discover that the Rippers are humanoid mutated kangaroos. Their creator, Johnny Prophet, taught them about reincarnation and they all know who their human selves were in previous lives, although Booga (Jeff Kober) was originally a dog. Despite their suspicions, the Rippers send Tank and Jet out on a reconnaissance mission to destroy a shipment of weapons, only to discover they were set up after finding the body of their creator Johnny Prophet stuffed in one of the weapons crates.

Jet Girl comes up with a plan to sneak into W&P. Kesslee, reconstructed after his injuries, reveals that Rebecca was bugged; their assault turns into a firefight that kills Deetee (Reg E. Cathey). Enraged, the Rippers quickly turn the tide of battle while Jet Girl kills Sergeant Small (Don Harvey) who had sexually assaulted her earlier. Kesslee reveals that Sam is in the pipe, a hollow tube that he is slowly filling with water. Tank Girl is able to use her tank to disable and kill Kesslee before pulling Sam from the pipe. The scene is followed by an animated sequence where water flows freely and Rebecca takes her boyfriend Booga water skiing; she tells Jet not to warn them of a waterfall as a surprise to Booga who dives from the cliff as the credits roll.

Produced by Richard B. Lewis, Pen Densham and John Watson

In 2019, actress Margot Robbie and her production company LuckyChap Entertainment optioned the film rights to Tank Girl, and subsequently hired Miles Joris-Peyrafitte as a director. [1]

Community content is available under CC-BY-SA unless otherwise noted.
Advertisement